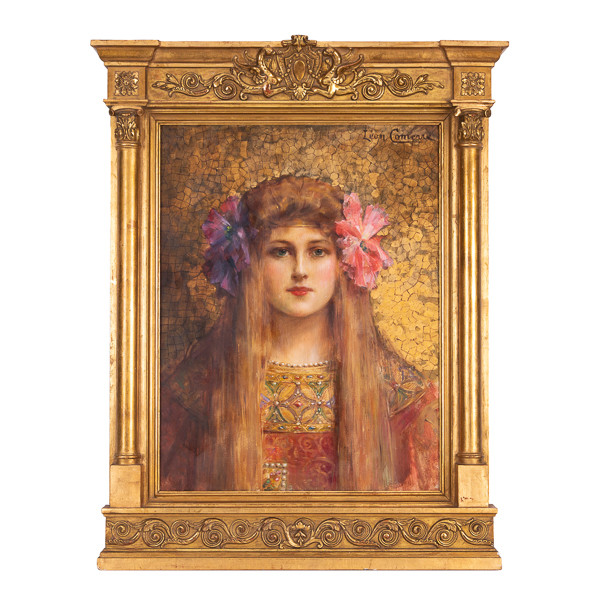 Léon-François Comerre (1850-1916) The young girl with camellia, oil on canvas

This painting will be included in the catalogue raisonné Léon Comerre achieved by Béatrice Durand and which is underway. A certificate of authenticity dated December 26, 2019, will be disbursed to the purchaser.

Originally from the North, Léon-François Comerre (1850, Trélon – 1916, Le Vésinet) was introduced to painting in the studio of Alphonse Colas in Lille. It is thanks to a departmental grant that he then continued his studies in Paris in the studio of Alexandre Cabanel as well as at the School of Fine Arts. In 1875, aged 25, he won the Prix de Rome for historical painting and won a bronze medal at the Salon: the artist was launched. Taste for his oriental paintings, his genre scenes and his portraits, Comerre led a comfortable life and settled down in a private mansion located rue Ampère, in the plain Monceau, the district where the artistic and worldly All-Paris was meeting.

The Young Girl with Camellias is a canvas painted by the artist in 1890 when he was renowned and had an official career. On that date, the artist had a workshop in Le Vésinet where everything suggested that he painted this painting. The bust model, seen strictly from the front, solemnly looks at the viewer. What is this young woman with youthful beauty thinking of?

The gold background of this painting evokes those of the Byzantine mosaics. The symmetry, the impassive gaze and the velvet costume adorned with a rich plastron of gold, stone and pearls recall Empress Theodora, whose effigy can be seen at Saint Vitale in Ravenna (6th century). In this painting, the vertical lines of the thick hair accentuate the hierarchy of the pose, just like in Byzantine art. The freckle recalls that of the women of the Pre-Raphaelite paintings, which Comerre surely knew, where it symbolizes lust, which Theodora was not without if one believes the historian Procope. In December 1884, the Victorian playwright Sardou put this historic figure in the spotlight at the Théâtre Saint-Martin in Paris, in a play of the same name, the heroine of which was played by Sarah Bernhardt.

The gilded wooden frame formed of architectural elements (columns, Corinthian capitals, entablature, and foliage patterns) in a neo-renaissance style is original. Associated with the painting, it produces a stylistic juxtaposition typical of taste in the 19th century.

The camellia flowers stuck in the hair are reminiscent of other orientalist works by Comerre, such as Odalisque with a tambourine. In 1890, the artist presented at the Salon a painting entitled Bain de l'Alhambra, which attests to this oriental touch in his painting. Besides, the camellias are of course reminiscent of the novel by Dumas junior La Dame aux camellias, a play given at the theatre in the years 1880-1890 and played by Sarah Bernhardt or even Miss Vallette. Comerre was familiar with this world, as evidenced by his canvases Phèdre and Célimène made for the Odeon at that time, or even the shots of his workshop in Le Vésinet frequented by Aimée Tessandier (Musée d'Orsay).

Did this painting have a counterpart? A classic beauty, also from Comerre, sold at Sothebys in New York in 2011, presents the same golden background, the same light treatment, framing and similar dimensions (68.5 x 50.1 cm). Nevertheless, the young girl has laurel blond hair, her look is softer, the pose less hieratic since the head is slightly tilted, and she poses three quarters. She also holds a book whose page she marks with her finger as if it were a tragedian memorizing verses. Were these two paintings portraits of actresses?

The Musée d'Orsay in Paris is home to some artworks by Léon Comerre. We know the museum possesses two photos of two versions of this painting, but we cannot track the versions themselves to this day.