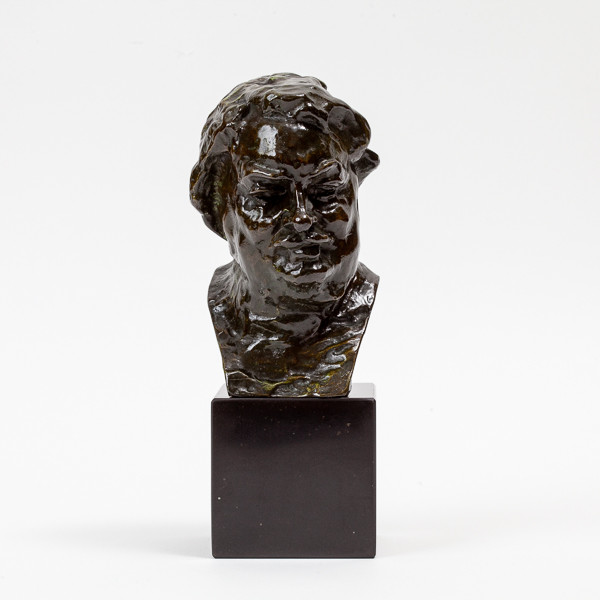 Auguste Rodin, Bust of Balzac, study type C, small model, 3rd version, bronze with shaded green patina. Signed «A. Rodin» (on the left edge of the collar) and bearing the foundry mark «A. Rudier. Fr Paris» (on the back); with the signature in relief «A. Rodin» (inside). Black marble base. Designed in 1892 in plaster by Rodin, this bust of Balzac was published in bronze in 1918/27 by the Alexis Rudier foundry in Paris.

Balzac, a type C study, is one of the first studies carried out by Rodin in 1892, in preparation for his memorable portrait of the famous French writer Honoré de Balzac. This bronze was made by the Alexis Rudier foundry for the merchant Gustave Danthon. Gustave Danthon has acquired the reproduction rights to the bronzes of Balzac plaster, type C. This cast was given by Rodin to Dr. Joseph Charles Mardrus. Dr. Mardrus and Gustave Danthon concluded an agreement dated February 15, 1918 on bronze reproductions (the documentation of this agreement is archived at the Rodin Museum).

In July 1891, the Société des Gens de Lettres, then presided over by Émile Zola, commissioned Rodin to build a monument in Balzac. Enthusiastic about the project, the artist immediately set about searching for his subject, examining all existing representations of Balzac. Convinced of the relevance of the regional aspect, Rodin went so far as to visit Balzac's native Touraine in search of a model. He found a driver, Mr. Estager, whose features were strangely similar to those of Balzac. Since Estager, Rodin has created two masks that have provided the sculptor with the starting point for Balzac's figure.

Rodin finally completed the final model of the monument in Balzac in 1897. Capturing Rodin's concern for realism, Balzac, a type C study, testifies to the fascinating working methods of one of the greatest sculptors of the modern era. A reduction of the face as well as different versions of the bust with variants were executed from 1918 by Gustave Danthon after the artist's death. In 1927 and 1933, the Rodin Museum bought most of the plaster models and their reproduction rights. To our knowledge, Gustave Danthon has executed at least 3 bronze versions of this small model bust.