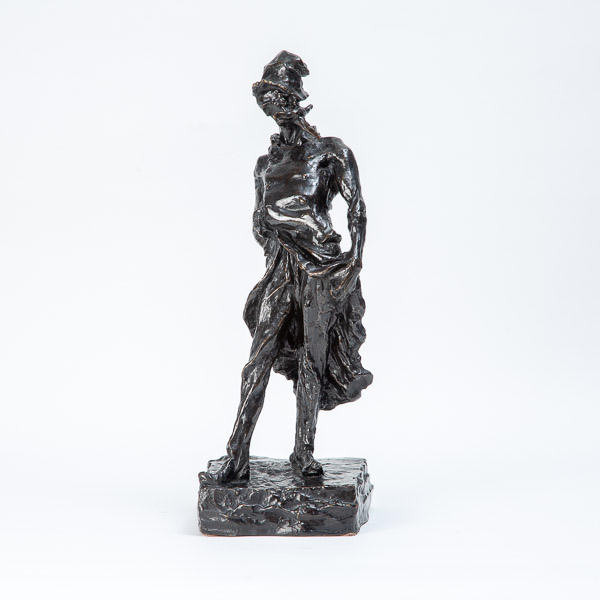 Posthumous shiny black patina bronze made from the 1851 model. Lost wax-casting by the Valsuani foundry (n° 1/10). Marking on the right back of the plinth.

Ratapoil is a character created by Daumier in 1850. He represents the caricature of a Louis Napoleon Bonaparte partisan.

Daumier was a die-hard republican. In 1831, he did 6 months in jail for drawing a glutton caricature of King Louis-Phillipe. To show is disapproval towards Bonaparte, he published the story of Ratapoil in the Charivari journal in an attempt to alert readers that the regime was a threat.

After the fall of the empire, Daumier gave life back to his character in a style very close to his Don Quichotte drawings. In what was called the “Série Actualités”, one of the plates showed a Napoleon-looking Ratapoil. His mustache, black redingote, and dented top hat helped give Ratapoil a demoted look.

Surprisingly enough, the current sculpture seems fairly modern as opposed to the one from the mid-19th century, especially because of its expressionist features.

The bronze version has the Daumier signature; an “S” at the back-right angle and “Siot-Decauville fondeur Paris n°4” on the left. It has been lent for several exhibitions around the world.

The original plaster for the bronze belongs in a private collection in Milan. It was made out of ruined soil by Victor Geoffroy-Dechaume.

Between the end of the 19th and throughout the 20th century, other bronze copies have been made by famous founders. Armand Dayot took the initiative to have them made from a second plaster that belonged to him thanks to molder Pouzadoux. It is currently preserved at the Albright Art Gallery in Buffalo.

The Valsuani foundry was established in the 19th century by Marcello Valsuani and his sons Claudio and Attilio. It gained popularity because of the quality of their work using the low-wax casting technique. They are also famous for having recreated in bronze some of the work done by Rodin, Matisse, Daumier, Degas and even Pompon.

In 2011, the bronze was exhibited at the Polish library in Paris.
A sculpture (bronze) of Honoré Daumier's Ratapoil by the Siot-Decauville foundry is on display at the «Musée d'Orsay in Paris».