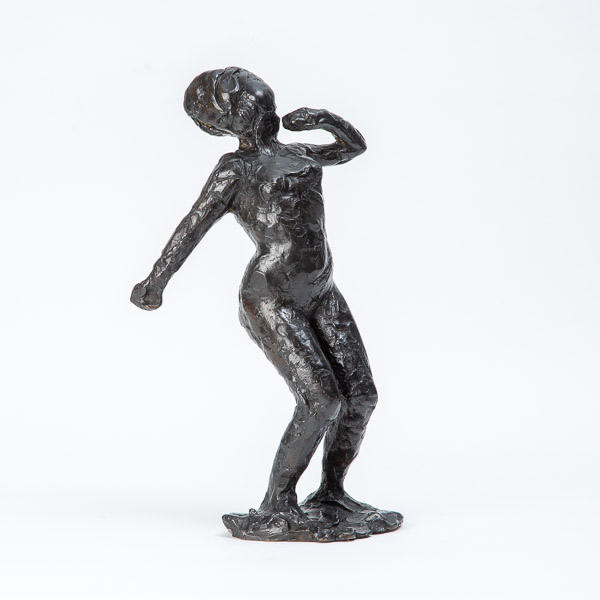 Femme s’étirant by Edgar Degas. Black patina bronze sculpture with the artist’s signature. Numbered IV/IX and registered as CH 53 by the Degas committee. Posthumous investment casting by Valsuani with the «Reproduction 1998» stamp. A certificate of authenticity from the Degas Committee, dated August 9, 2011, will be provided to the purchaser.

This work by Edgar Degas (1834-1917) is one of the seventy-three sculptures discovered in his workshop after he passed away. According to French sculptor Paul-Albert Bartholomé who died in 1928, the artwork was in good enough condition to be casted in bronze.

This process was first performed by Adrien-Aurélien Hébrard (1865-1937). In fact, in the month of May 1918, a contract was signed between Degas’ and the Hébrard foundry. It legally authorized the casting in bronze of Degas’ work. It also mentioned the reproduction of two additional copies of the Femme s’étirant; one for the artist’s heirs and one for the foundry.

Then, in 2005, new bronze versions were made by the Valsuani foundry. They used a specific technique called the “lost-wax casting” (also called “investment casting). These new versions were authenticated in 2007.

The black patina bronze sculpture bearing Degas’ signature currently remains in the Musée d’Orsay in Paris. The original wax version bearing his signature on the left foot of the sculpture remains with the Paul Mellon collection at the National Gallery of Art in Washington.

It is interesting to know that on the first-hand Beaulieu frequently compares the Femme s’étirant to the Repasseuse baillant, also by Degas, when on the other hand, some people compare it to the other Femme s’étirant by Italian artist Zandomeneghi.

Edgar Degas was primarily an impressionist painter but he got into carving around 1880. He gave birth to a series of Dancers and Women, often naked. At that time, people were impressed by the realism Degas was able to give to his sculptures. Whether it was with his drawings, pastels or paintings, it was always the accuracy of the position that transposed this idea of movement.

American painter Mary Cassatt (1844-1926) also said about Degas: “I studied Degas’ work for months and I think he is even more talented as a sculptor than he is as a painter”.

In 1931, the Femme s’étirant was acquired by the Louvre in Paris thanks to the generosity of Degas’ heirs and the Hébrards. In 1974, it was moved over to the Jeu de Paume room. It stayed there until 1986 to be transferred over to the Musée d’Orsay where it currently remains.