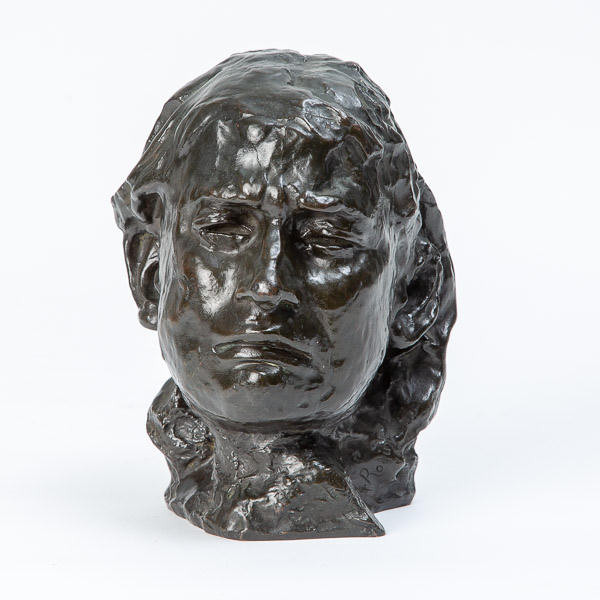 The second version, also called “neck cut halfway and asymmetrical hair” version, has been designed around 1885. Our melted bronze copy was made in 1927. It was originally a shaded brown patina bronze. It is signed « A. Rodin » and « Alexis Rudier / Founder, Paris », the mark of the foundry, on the back of the neck.

A note of inclusion in the Review Catalog of Auguste Rodin’s sculpted work of the Auguste Rodin Committee will be given to the buyer (n° 2014-4511B).

The Pleureuse, also called the head of woman crying, is one of the favorite motifs of Rodin who used it several times with variations, especially in the hair. Today, it is probably the work of the sculptor of which most copies were made. The head we are studying here was melted bronze patina nuanced, by Alexis Rudier in July 1927, others also exist in marble, plaster, or sandstone. Auguste Rodin, like many of his contemporaries, enjoyed experimenting with the effect produced by the translation of the same work into various materials.

On this copy, we find the mark of the founder at the back of the neck, and the signature of the sculptor on the right. Tense features, creased eyes, contracted cheekbones and tight mouths highlight the feeling of pain and despair of this woman represented in sculpture. Camille Claudel (1864-1943) was the muse and the mistress of Auguste Rodin. She is sculpted just when they have just parted from where her face contracted by pain, crying and her hair scattered. Although no tear is visible, the accuracy of the expression is enough to say that this woman is crying.

This work comes from a series of masks called The Door of Hell, Rodin's pivotal work. Indeed, The Door of Hell is a commission of the State made in 1880 for a gateway to the Museum of Decorative Arts in Paris. In order to craft this work, Rodin relies on Dante's Divine Comedy, especially on the first part of the poem, the one devoted to hell.

This second version of the Mourning Head was included in the first state of The Gate of Hell to adorn the bottom of each of its leaves. Unfortunately, because of a lack of funding, it remained in the plaster state during Rodin's lifetime and was melted into bronze only after her death.

The writer, Octave Mirbeau (1848-1917), evokes this Pleureuse in 1885 by writing about The Door of Hell: Bas-reliefs (...) on which hang masks of pain. Along the river of mud, centaurs gallop, carrying bodies of women who wrestle, roll and writhen under the upstanding rumps.

Simultaneously with this work, La Pleureuse was used as the main motif of Le Masque vase edited by the Manufacture de Sèvres. It became an autonomous sculpture in the early 1890s when it received a high base. The Pleureuse masks have had many variations, presenting either the features of a weeping face or a kind of faunal face. In addition, their presentation also changed, the head being either embedded in a block as a high relief, or placed on a base, flush with the chin, as it is the case for the second version.