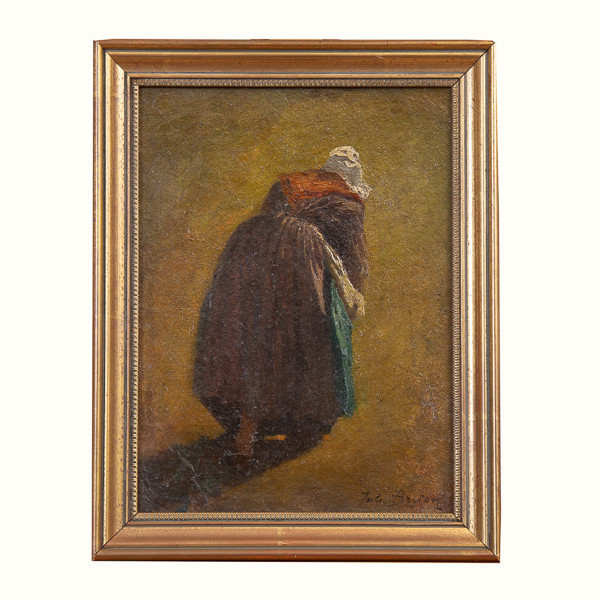 Gleaner curved from behind painted by Jules Breton, Oil on cardboard glued on wood signed lower right «Jules Breton». This oil painting is a study for the gleaner which is part of the collections of the National Gallery of Ireland in DUBLIN.

Our painting was exhibited:

The study “Gleaner curved from behind” by Jules Breton (Courrières 1827- Paris 1906) for the painting “The Gleaners” from 1854 kept in the collections of the National Gallery of Ireland in Dublin, takes up a rural theme dear to naturalist painters. The most famous work is undoubtedly that of “L’Angélus” by Jean-François Millet from 1858. In the 19th century, realist painters upset the hierarchy of genres by painting landscapes and genre scenes. Somewhat differentiated from social realism, naturalist artists, like Jules Breton, chose to depict peasants and workers at work; thus representing the daily and authentic life of a disadvantaged class. Rural themes then reach their glory days and become extremely popular with the public.

The study “Gleaner curved from behind” represents a close framing on a full-length portrait of a peasant woman with a curved back and her face looking at the ground. The theme of the peasantry, evoked in this painting, testifies to the painter’s preference for the rural world which he particularly liked and which reminded him of his childhood in Courrières in the Pas-de-Calais.

“Peasant painter” as he called himself, he executed several works with gleaners as their characters, such as “Rappel des Gleaneurs”, one of his most famous works painted in 1859. In the study “Gleaner curved from behind”, the character is bathing in a luminous atmosphere on a background of greenish grass where a slight lighter halo is surrounding the character. The colours of the composition are limited to complementary colours creating a mosaic of powerful and very present tones: the blue of the apron responds to the orange of the headscarf, the blue of the shadows responds to the orange of the leg, the purple of the dress responds to the yellowish tints of the background. The touches of white emerging from the bonnet and the apron brighten up the composition. Jules Breton placed this woman in his painting entitled The Gleaners in the background in the group on the left. However, the treatment of the preparatory work is more successful than in the final work where the colours are replaced by shades reduced to whites and beiges. Jules Breton's study is more like a small painting. The artist's signature in the bottom right corner certifies that this preparatory painting is considered in the same way as a work of art in its own right.

It was during this same period, in the 1850s, that he renounced the theme of working poverty transposed in his early works in favour of an idealized vision of the rural world. This conception is confirmed in his study Gleaner bent from behind, where the aesthetics of the subject prevails over the idea of the harsh reality of work in the fields in which the women of the rural proletariat had to glean at the end of the day from the ears left after the harvest. This new approach took him away from Millet's genre scenes. Awarded medals of honor, Jules Breton won the favor of critics and art lovers. His very classical way of painting, far from the audacity of Courbet, gives him the place of a worthy representative of the naturalist painting of the Second Empire and the Third Republic. The works of Jules Breton representing gleaners are today highly prized by institutions both in France and abroad. It is in the United States that he seems most appreciated for his moralizing scenes inserting a human dimension.

Private collection of a descendant of the artist