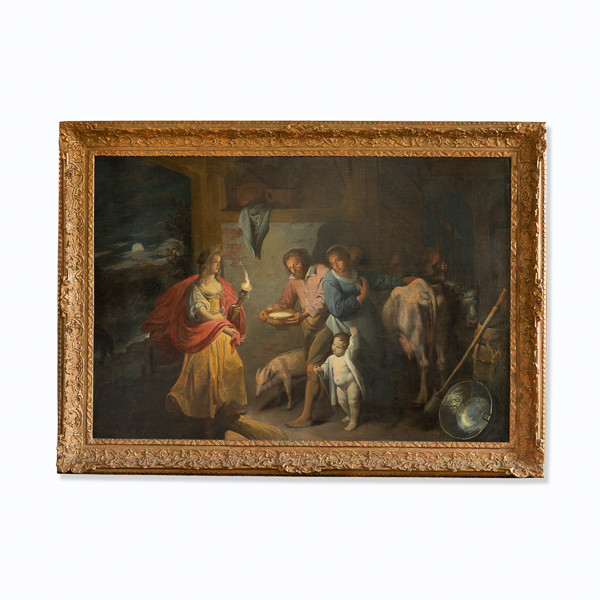 Oil painting by DAVID RYCKAERT III (1612-1661) from the late 1650s in a Regency style wooden and gilded stucco frame by RAPHAEL. A certificate of authenticity from Turquin - Paris will be given to the buyer.

In this unconventional representation of an episode from Ovid's Metamorphoses, Ceres asks a couple of peasants for hospitality. She goes into a barn where a family and their animals are located, lit by the torch she holds in her left hand. The poetic atmosphere of this celestial appearance in a rustic interior is created by the delicate colour and the gap with the night landscape.

The scene represents an episode in Ceres' story as she searches for her daughter Prosperpina, when she knocks on the door of a peasant family in the middle of the night to ask for a drink. Ceres, goddess of agriculture, is depicted on the left as an elegantly dressed young woman, with corn cobs in her long curly hair and a sheaf of wheat at her feet.

A large garment floating in the wind is wrapped around her shoulders, the end of which she holds stretched with her right hand. In her left hand, she holds a flaming torch that is painted in the center of the canvas and represents the only source of light in the painting. She takes a protective look at the family of peasants to the right of the painting. Near Ceres, the head of the family, a bearded man with bare legs advancing in his direction to offer him a large bowl of milk.On the ground, just in the middle of the painting, a pig fills the space between them.A little further to the right is the farmer's wife who turns around to face Ceres.

His left hand is on the back of a cow, whose rump is the only one shown to the spectator. A little boy stands in front of her, clinging to her skirt. He is dressed in a long open blouse revealing his nakedness, his chubby body. Behind the peasant's wife is the head of another character absorbed by the darkness of the night. In the right corner of the painting, at the bottom, there is a copper basin, a basket, a barrel and a broom. A little further down the road, we can see the head of a second cow.

The scene seems to take place in a barn, where the characters are gathered in front of a wall, above which are placed a crumpled garment and some containers. On the right, this same wall stops abruptly and reveals a room in which you can see a woman protecting a candle with her hand.

Ceres is waiting on the threshold of the barn. Behind it, on the left, the exterior opens onto a distant landscape, wrapped in the darkness of the night, the moon being partly hidden by the clouds.

Although Ryckaert has largely modified the original image, his work is clearly an illustration of a scene depicting Ceres as described in Ovid's Metamorphoses.

Ceres' elegant appearance suggests that we are in the 1650s, while the presence of the pig leads us to date this work to the end of the same decade.