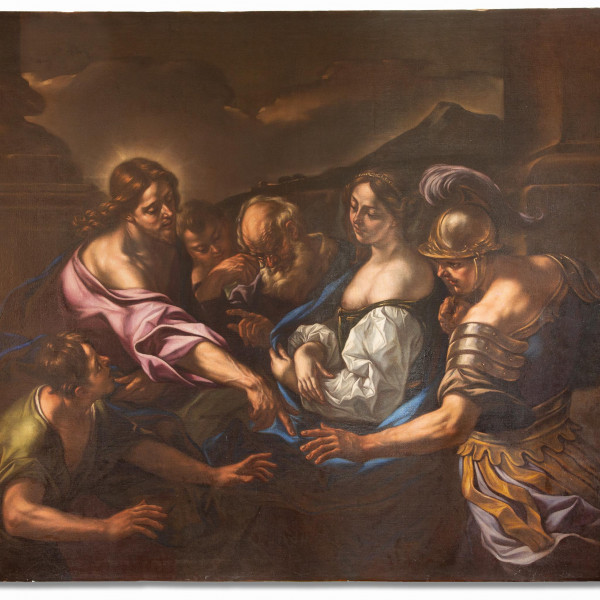 This large painting (260x206 cm) by Beinaschi, unsigned, was appraised by the Turquin firm in Paris, which recognised its authenticity.

The painter of Piedmontese origin Giovanni Battista Beinaschi (Fossano, 1634 or 1636 - Naples 1688), is one of the most imaginative figures of Italian Baroque in its advanced phase of expression, as shown by the numerous paintings, frescos and altars, made on commission from rich private and important religious orders, for noble houses and churches in Naples and Rome. Beinaschi, whose work is a good blend of Roman and Neapolitan culture, was awarded the Cross of the Order of Saint Maurice and Lazarus by the Savoy family for his merits, and according to Lyon Pascoli «at different times of other distinctions». As a knight, he is remembered on the engraved plate on his grave in Santa Maria delle Grazie in Caponapoli. Like the painters Pierfrancesco Mola, Luca Giordano, Sebastiano Ricci or Paolo De Matteis, Beinaschi was also an itinerant artist, who was able to absorb many influences during his travels in Italy, including the long stops between Rome and Naples. The quality of his painting, the mastery of his composition through the mastery of drawing, the strength of his invention which almost never led him to reproduce the same ideas, even in paintings of the same subject, made his art a fundamental moment for the affirmation of the Baroque in Naples, between the mid-1660s and the late 1680s, which influenced artists like Francesco Solimena and Paolo de Matteis.

Recently discovered thanks to the excellent work of Vincenzo Pacelli and Francesco Petrucci, «Un Artista Barocco tra Roma e Napoli», Beinaschi has regained its central place in 17th century Italian baroque painting. These works reflect his taste for swirling figures in an open space and a clever shortcut.

Although little known to the general public, many of Giovanni Battista Beinaschi's works decorate the walls of the world's greatest museums, such as «his Christ in contempt» in the Louvre Museum's collections, but also at the Metropolitan Museum of Art in New York and the San Francisco Museum of Fine Arts, and so on.