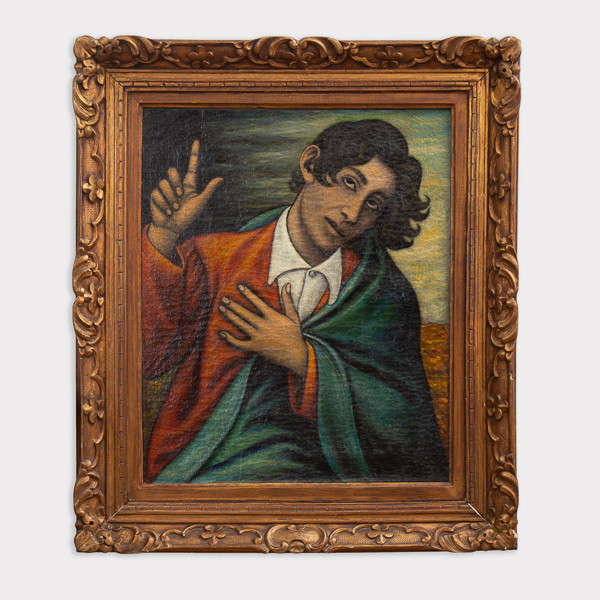 Fabian de Castro was born in 1868 in Jaén (Spanish city of Andalusia). He grew up in Seville, and his temperament led him towards the cultivation of a kind of art, for which he kept all his life the deepest devotion: the guitar.

As one of the most famous guitarists and flamenco guitarists of his time, he also made, of course, his forays into that other flamenco and national art that is bullfighting. He fought a few bullfights but soon returned to «sonanta», with which he made a triumphant tour throughout Spain. Then Marseille, Paris, Moscow...

Fabian de Castro is a brilliant intuitive. Very modern and very old at the same time, his painting has an undeniable force and the value given by the original and inimitable personality of the gipsy painter. Everything is courageous, compelling and suggestive: the colours, the line, and the composition.

It was by pure chance that he became a painter, as he recounts in an interview published in the daily L'Heraldo de Madrid on January 15, 1931:

«I have always drawn, since I was a child, without anyone teaching me. But I didn't think it was an art. For me, being a draftsman or painter was like being a mason or a carpenter, a job like any other. For me, there was no other art than music; in music, flamenco, and in flamenco, the guitar.

Yet, I arrived in Paris after coming back from Russia and began to frequent the studios of Spanish painters, who used to call me to give them guitar concerts. That is where I realized that painting was also great art, so I said to myself: You can do that too, Fabian.

I bought canvases, brushes and paints. I went home and started painting without telling anyone about it! In 1914, I had my first exhibition in Paris, and I had my first success as a painter.»

«Fabian de Castrosays El Gitano“ had an exhibition at the Galerie Chérou. It was with the sculptor Manolo, then Picasso's neighbour, that I met Fabian, the most heartbreaking guitarist in “all” Spains, fifteen years ago. We were already talking about this portrait of oneself that the Gitano had started. Since then, he has not stopped painting. Fabian grafted all the science of his friends onto his first ingenuity. He was, first of all, trained by them in El Greco chapel. But I believe that it is through direct works that Fabian will free himself by revealing himself. Rude, clumsy, translating into rustic a correct vision and fine feelings, he brings to light something which is at the bottom of the Spanish soul and which had ceased to appear.»

In the review L'Art et les Artistes of January 1, 1925, Jean Cassou (1897-1986), a writer and an art critic makes us feel the work of Fabian de Castro: «Everything contributes to making this canvas one of those vast and living creations, to the presence of which we were no longer accustomed: the dazzling liveliness of colours arranged with tragic happiness and their freedom.

And it is perhaps through this organic quality of life that the paintings of the Gypsy come closest to the great Spanish painting: the drama here arises from all that separates and unites this adorable naivety and this instinctive perfection. These works by one of the most original men there are, give us the idea of we know not what eventful and pathetic reality, but necessary and which is imposed on us, our senses, our need for things sad, violent and mysterious.»

This oil on canvas addresses two favourite themes of Fabian de Castro: religion and portraits of people from the gipsy community. This portrait of a young gipsy evokes the artist's self-portrait. The pose brings him closer to representations of Christ blessing.

His work, although influenced by the School of Paris, remains disconnected from the great currents of painting.

The composition, the shapes and the lack of perspective seek visual simplification. The foreground portrait is slightly out of frame. The overall very geometric construction revolves around two diagonals. The first, crossing the whole canvas, is suggested by the inclination of the head and the body. The second follows the left arm and takes the same axis higher up with the gaze turned towards the sky. The raised right arm and the pointing finger give verticality. For the simplified background, the painter textures the sky and the wheat field with a brushstroke, reminiscent of Van Gogh.

The shapes are close to flat patterns, with little volume. The lightening of the shadow purifies the scene.

The colour palette revolves around ocher-reds and blues, ranging from bright hues for the young man's suit to muted tones for the decor. The arrangement of the colours uses the diagonal of the painting as an axis of symmetry. They thus impose the play of contrasts: white of the shirt and dark skin of the face, raised hand and dark part of the sky.

The inclination of the gipsy towards the clear sky, his peaceful face, the delicacy of the hands and the airy movement of the hair make the composition light and convey the impression of touching naivety.