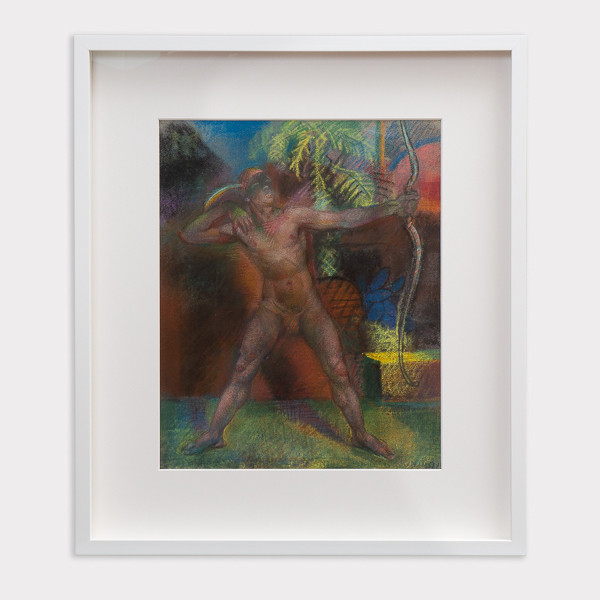 Pastel on paper, signed lower right in pencil «Emil Olsson» and dated on the back «1923».

Emil Johan Olsson is a Swedish painter, a member of the modernist group of Twelve (Les Douze).

His artistic education also included study trips, and he went to Paris in 1914, where he mainly studied the work of Paul Cézanne. Returning home in May of the same year, he painted with a light and fresh palette. But in the fall of 1917, he took a keen interest in the art of Vincent van Gogh and painted an oil painting, Automne, in which van Gogh's influence was noticeable in the colourful palette. In Copenhagen, he studied the early masters Hans Memling and Lucas Cranach the Elder, and after the end of the First World War, he returned to Paris, where he attended André Lhote's studio from 1920 to 1921. In 1922 he also went to Italy and, in 1924, to the Netherlands and Belgium.

Emil Olsson would become one of the artists who contributed to the breakthrough of modernist art in Sweden. After several stays for studies in Paris, he became, alongside artist Johan Johansson, who had returned from Germany, and artist Svante Bergh, who had studied both in Germany and France, one of the main representatives of modernism in Swedish painting. A group of modern artists, all from Sweden, met in Paris in 1921 and formed the group of Twelve.

The group exhibited together for ten years, from its beginnings at the Malmö Museum in 1924 until its disbandment in 1934. Other members were Svante Bergh, Tora Vega Holmström, Emil Johansson-Thor, Anders Jönsson, Nils Möllerberg and Jules Schyl.

This work fits into the current of modern Swedish art from the beginning of the 20th century. The pure light composition is imbued with Post-Impressionist inspiration and the graceful stylization suggests the beginnings of Cubism. Emil Olsson thus integrates the influences of Cézanne, Van Gogh, Gauguin and André Lhote.

In the foreground, the theatre archer is depicted as a young Negroid man in a loincloth and with feathered headwear. This choice may be related to the attraction for primitivism, characteristic of Gauguin. The man is in the shooting position, the bow in his left hand, the right arm back has just let go of the string. The gaze is in the direction of the arrow. The upper part of the face remains in shadow; just the eyebrows indicate the location of the eyes. The modelling is based on the perception of colour and not on the classic work on shadows.

The tonal gradation suggests depth without sacrificing the brilliance of colour, a concern dear to Cézanne. Applying colours in small strokes gives vibrant and dazzling reflections. The use of bright, pure tones evokes Van Gogh and creates a strong impression. Two palettes correspond to each other: ocher tones complement greens and blues. The yellow highlights illuminate and link the two colours.

As with Cézanne, the treatment of light is remarkable. The shades of bright yellow build the composition of the painting. The light follows an arc of a circle opposite to that of the weapon. It starts from the leaves of the palm tree, passes through the feather of the cap and ends on a low wall. It gives the illusion of emanating from the archer.

The scene exudes an atmosphere of simplicity and natural harmony.