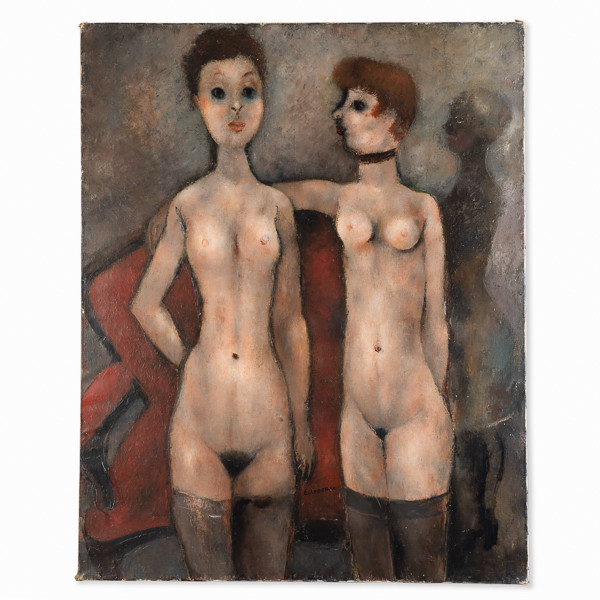 This oil on canvas by Edouard Goerg, entitled «Les Innocentes» and painted in 1928 will be included in the catalog raisonné of the painted works by Edouard Goerg in preparation by Madame Francine Germak and Madame Philippine Maréchaux.

From 1920, Edouard Goerg (Sydney in Australia, 1893 - Callian in France, 1969) became one of the key figures of the French expressionist movement. In between the wars, he participated in the Ateliers d'Art Sacré with his former master Maurice Denis. The conflict between him and his father, Gustave Goerg, director of the family counters of Irroy champagne in Australia, then in Great Britain and France, directs his painting towards a critique of bourgeois society and its hypocritical mores. Until the early 1930s, his work thus denounced the society flaws to which he belonged. It was during this time that he painted his work «The innocents» in 1928.

The painting entitled The innocents presents a caustic image, a societal caricature. This work is the distressing and stylizing reflection of a house of prostitutes through which the artist wants to achieve extreme expressive intensity. The content of the work remains more important than the form for expressionists. Edouard Goerg stigmatizes the flaws and vices of the elite under the Third Republic, which took advantage of the golden age of brothels, and which enriched the State in particular by deducting 50 to 60 per cent from the profits of that flourishing business.

The composition of the work is treated in two dimensions and without perspective. It shows two nude women in the foreground, with a third in very dark colours in the background. The chromaticity is reduced to pearly colours, enhanced by the deep red of the armchair.The latter is one of the essential elements for contextualising the scene thanks to its distended forms. The characters, with sharp lines, are surrounded by blacks, like the works of Fauve artists. Edouard Goerg’s dark palette will then gradually lighten in his next works. The red-haired woman on the right sports a choker worn very high, as if to represent the strangulation of her condition. Considerate, she looks and embraces her colleague on the left who faces the viewers. Women wear stockings, an expensive item at the time, but which made them look the sexiest.

Committed, the painter Edouard Goerg first fought against the bourgeois elite and then took on a more political dimension. He has this capacity to transport the spectator towards strong emotions by using the drama or the violence of the represented scenes, such as in the painting The innocents. Renowned in its time, it is appreciated today by art lovers, as evidenced by the acquisition of the canvas Les innocentes by Nelly Kaplan (1931-2020) and Claude Makovski (1936-2020), an iconic couple from French cinema of the 1960s. Together, these latter created the famous company Cythère Films, where they produced around ten short films, including Le Regard Picasso, which won the Golden Lion prize at the Venice Film Festival in 1967. The beautiful collection of graphic works left by the couple testify to their taste for dreamlike and eroticism, and their truly libertarian spirit. Among the masterpieces from the collection, big names such as Pascin, Gustave Moreau, Robert Delaunay, Francis Picabia… and also Edouard Goerg with The Innocents.

Collection of Nelly Kaplan and Claude Makovski, iconic couple of French cinema of the 1960s.