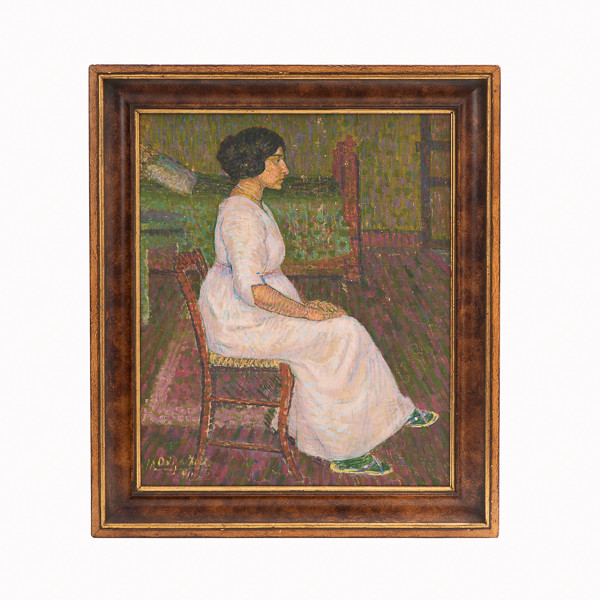 This oil painting on canvas by Manual Ortiz de Zárate represents his Polish partner Edwige Piechowska pregnant with their daughter Laure a few days before her birth on August 9, 1911, in Montpellier. It is signed and dated 1911 lower left, countersigned, dated 1911 and titled on the back of the canvas: «L'attente Ortiz - Montpellier 1911 LL.», «LL.» corresponding to the initials of their daughter Laure who married in 1941 to Eugène Lourié, a French designer and artistic director, of Russian origin.

«L'attente» is under the influence of Fauvism in the modelling of the plans and the audacity of its tones. The shapes are simplified to the extreme, divided by very marked outlines. Large flat colours show this woman without accessories of effects, in a search for instinct, separating the colour from its reference to the object, to emphasize the expression.

Son of the composer Eleodoro Ortiz de Zárate, Manuel remained in Italy during his first four years of life, and once in Chile, he began his artistic training with one of the best painters in the country, Pedro Lira. He then studied for a short period at the School of Fine Arts in Santiago.

In 1902, at the age of fifteen, he set sail for Europe; after many vicissitudes, he moved to Rome, where he obtained a place to study at the Academy of Fine Arts and earns a living by reproducing paintings mainly by Guido Reni and travelled to Paris on several occasions.

In 1904 in Venice, he met Amedeo Modigliani with whom he befriended and hastened to describe Parisian artistic life to him. He fell in love with Edwige Piechowska, who had just completed her studies at the Academy of Fine Arts in Warsaw and who continued them in Florence. Attracted by the artistic activity reigning in France, they moved to Paris in 1906, where they successively occupied several workshops in the Montparnasse district, notably at La Ruche.

In the French capital, he joined the famous and avant-garde Ecole de Paris, of which he is one of the most authentic representatives and where he lived with a group of well-known artists, bastions of modern painting such as Picasso, Modigliani, Othon Friesz, Derain, Maurice Denis…

The poet Apollinaire nicknamed him the unique Patagonian of Paris because of the origin and looks of Manuel Ortiz.

In 1923, he was in Chile when, with his brother Luis, Henriette Petit, Luis Vargas Rosas and José Perotti, among others, he participated in the founding ceremony of the Montparnasse Group, thus giving birth to the first movement that renewed Chilean painting in accordance with the new artistic trends of the 20th century.

In 1946, he decided to return to Chile but died on October 28 on his way back to Los Angeles, United States.

If Manuel Ortiz de Zárate’s cubist period is well known, it is not the same for his previous period where, according to our knowledge, «L'attente» is one of the few works that survived his Fauvist period.

This piece of art has been kept by the artist’s family to this day.