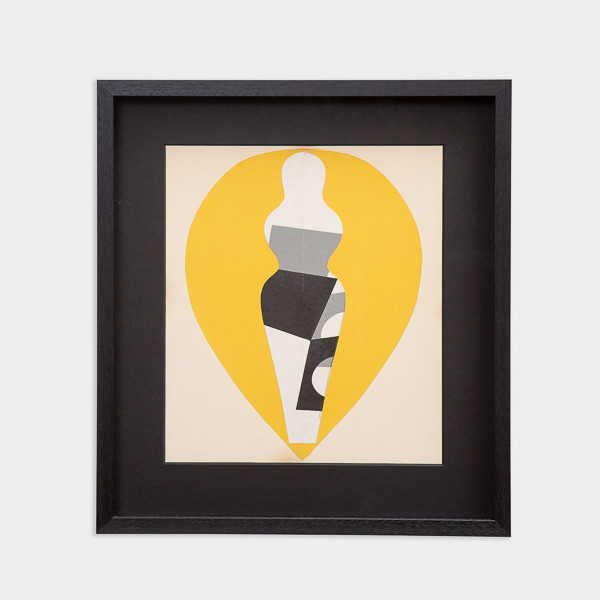 Collage on paper laid down on board named «Blason poupée n°4» from 1963.. A certificate of authenticity from the Arp de Clamart Foundation dated January 19, 2021, will be given to the purchaser.

The 1960s were teeming with astonishing artistic research. The evolution of cultural and artistic mentalities took shape with the New Realism founded by Yves Klein. Then movements like Pop art, Fluxus, Op art and Kineticism, Minimalism, Italian Arte Povera, Conceptual Art, Hyperrealism, Land art, Body art and the irruption of L'Art Brut in 1967, until Support / Surface with the first exhibition in 1969, continued questioning the meaning of a work of art. Avant-garde artists admitted that performance was not necessarily intrinsic to the work, but was more often the product of the context in which it exists. All these movements, often in competition, however, ensured the passage of modern art, which offered stylistic innovations, while retaining classic supports. It is in this movement that Jean Hans Peter Wilhem Arp, known as Jean Arp (Strasbourg 1886 - Basel 1966), evolved and developed his art according to the theme of chance and created in 1916 a series of untitled collages that we would name later as according to the laws of chance. His work would always remain focused on chance and the spontaneity of the hand, whether in graphic art or sculpture until his death in 1966.

Coat of arms doll n ° 4, from 1963, made by Jean Arp in the last years of his life, is part of a series of collages on the theme of dolls that began in the 1950s. The theme of Kastina dolls fascinated surrealists like André Breton, Paul Eluard or Max Ernst, and it is quite naturally that Jean Arp took up this theme in these works, having flirted with this group until the 1930s. However, he made them in a renewed formal and aesthetic way. In this respect, Poupée Blason n ° 4 is inspired by his latest artistic explorations. In contrast to the purely intellectual tendencies of Cubism and Expressionism, he favoured art through the senses, just as the Dadaists conceived it and he was the co-founder of that movement. This is how he turned towards a search for the greatest formal purity perceived in the work Blason doll n ° 4. In this painting with its chromatic reduction to the dominant yellow, he denies the traditional perspective, which gives way to flatness in the composition. Within the curved forms, which can be related to a nesting doll, the geometric figures are declined in negatives, thus composing the patterns of a garment. Jean Arp includes the vocabulary of the human figure, a source of inspiration also explored in the works of Joan Miró. The evocation of the human figure will prove to be extremely influential for abstract artists of the late twentieth century. Even today, artists such as the sculptor and painter Axel Cassel (1955 - 2015) continue in this direction with the need for a figurative representation.

If the work of the surrealist Jean Arp is well known, in particular thanks to the museum of modern and contemporary art of Strasbourg which devoted to the artist its picture rails of a central space, or the Arp foundation in Clamart, his late pieces of art like Coat of arms doll n ° 4 are much less diffused and consequently little studied in the bibliographies.