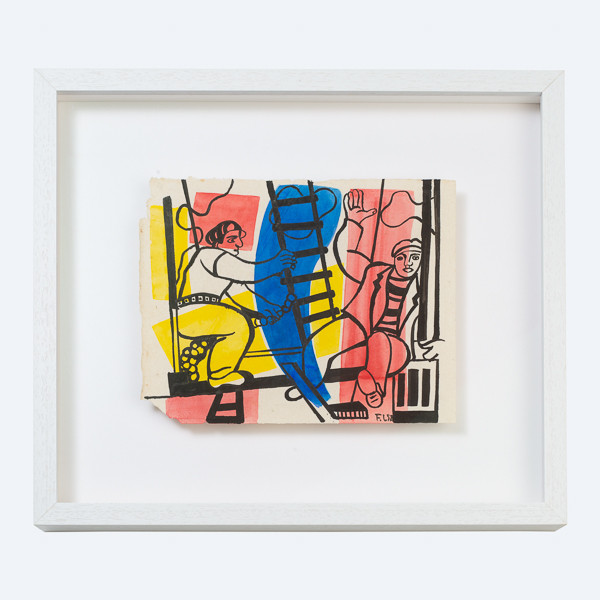 Gouache on paper « F.L »and dated « 52 » in the bottom right corner (slight gaps at the top and bottom left). A certificate of authenticity of this work by the Léger committee (certificate n° FL-20191-000225) dated November 27, 2019, will be given to the purchaser. This gouache will be included in the catalogue raisonné in preparation.

« Les Constructeurs » is Léger's symbol of the worker, both as a class within French society and in the industrialized world in general, and as a more universal symbol of the home faber, man maker and builder. Léger joined the French Communist Party in 1945, almost exactly one year after Picasso, and was eager to get in touch with workers and extol their rôle in society.

The artist wrote in an article published in 1946 in the Arts of France: « The contact between the people and the work of art is a problem that is in the air, everywhere; but you have to be close to the people to speak to them..., « He recalls his experiences with comrades from all walks o life in the trenches during the First World Waar, « This where I fully understood what is a man of the people ». In a statement that Georges Bauquier quoted in the catalogue of the 1963 Léger exhibition at the Pushkin Museum in Moscow, where Les Contructeurs was presented, éger recalls:

« I had the idea of going to Chevreuse by road every evening where a factory was being built in the fields there. I saw the men swinging high on the steel beams! I saw men as fleas, they seemed lost in the constructions with the sky above them. I wanted to make this; the contrast between man and his constructions, between the worker and all metallic architecture, this hardness, this ironwork, these bolts and rivets. The clouds too arranged them technically, but they form a contrast with the beams ».

This site is only one of the thousands which develop all around France, and countless others in the rest of Europe, as the post-war recovery progress. It is likely that Léger also thought of the skyscrapers he had seen to rise in Manhattan during his visits in the 1930s, then of the construction site in New York and elsewhere during his exile in the United States during World War II to escape Nazism.

Léger wanted to create an even more epic tribute to the aspirations and efforts of modern society in The Constructors by extolling the value of dynamic and hard-working proletarian labour. It also expresses Léger's interest in the mechanical and geometric aspects of the human environment. Besides the sincere respect for the heavy burden of simple manual labour, the spirit of the Builders embraces the visionary dimension related to the man builder and praises the state of mind, the carefully worked plans and of a cold beauty of the man architect and engineer. Léger created an exclusively masculine, muscular and sweating environment.