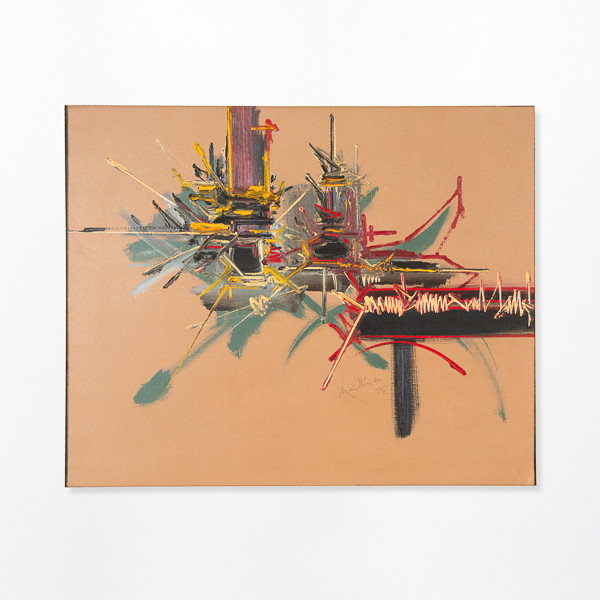 Canvas, signed Mathieu 78 in the middle below, titled «AMMOMUM» and dedicated on the frame: «For André Théry in friendly memory of Mathieu». A certificate from Mr. Edouard Lombard, Director of the Georges Mathieu Committee, dated 7 October 2018 will be given to the purchaser.

The creation of the famous Antenne2 logo, which invaded the small TV screens in the 1970s and 80s, notably made the work of Georges Mathieu (Boulogne-sur-Mer 1921- Boulogne-Billancourt 2012) famous. He revolutionized the art of Kandinsky's abstraction by turning away from geometric aesthetics in the late 1940s He brought a new visual language to the movement, focusing on shapes over the content and gestures over intentions. He liberates his practice from all previous aesthetics in the history of art. In 1947, "L'abstraction lyrique" was born.

His painting "Ammomum" executed around 1978 characterises the non-figurative art of Georges Mathieu. He depicts graphic segments, using long Japanese brushes, without mixing his colours and with virtuosity in the movement. Yellow and red lines zigzag above a bluish flash and around tints of brown colour. The bright tones of the lines are reinforced and intensified by the less dense colours of the other elements. Whitish hatchings appear in the painting, sometimes like a measure of a graphic rhythm, sometimes burst into the composition like sparks. The set of lines and the strongly contrasting chromatic animate a dynamic composition on the light background of the canvas. It was during this period that the painter matured and his palette expanded with more streaked colours. Provoked by an ecstatic and spontaneous expression, his gesture is quick and sure. Bold, freed from all material reality, Georges Mathieu's painting becomes an abstract emotion.

Evoking alarm signals, the interweaving of signs and colours leads to leave the viewer with feelings of excitement. This work is a part of a long series of the art performances by the painter with a recurrence of forms and where gestures are improvised.

The title "Ammomum" echoes the quirky and poetic titles that the artist gives to his works. Amomum is a plant that grows in India and China and has anti-inflammatory properties. Inspired by Chinese calligraphy, this title is perhaps chosen with a nod to the art of the Far East that he studied and analyzed. He devoted an essay entitled "Relevance of certain aspects of lyrical non-figurative painting and Chinese calligraphy" to it.

The paternity of the lyrical abstraction of Georges Mathieu is recognized beyond the borders. His creative and new expression, inspired by Jackson Pollock's dripping technique, dominates the non-figurative art of recent years. This is how his work shines in Europe and the United States where monographic exhibitions have been always devoted to him. Across the Atlantic, Mathieu's art is called "action painting".

Canvas exhibited between 9 and 25 May 1979 at the monographic exhibition Recent Works at Wildenstein in New York, painting no. 5 in the catalogue.