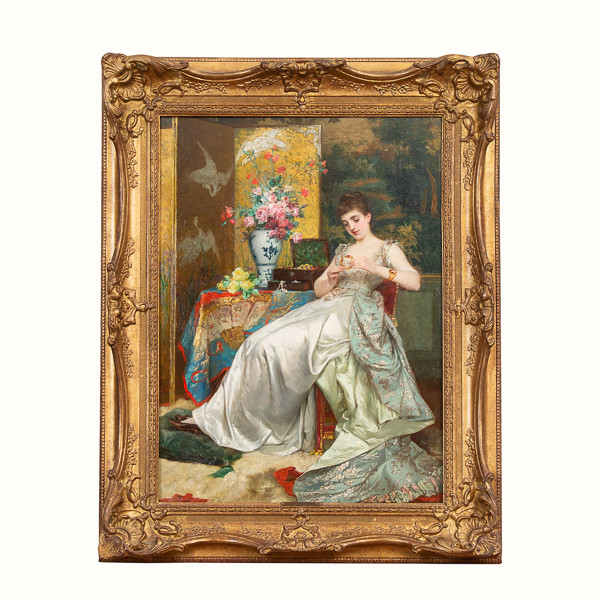 «The favourite jewel», oil on panel signed in the centre on the right «Frans Verhas». This work was painted between the years 1850 and 1894.

Influenced by the great master of genre painting Alfred Stevens, FransVerhasused to paint elegant women as in the painting The favourite jewel executed around 1850-1894. He depicted in the latter a delightful woman embodying coquetry in a luxurious interior.

The woman is placed in a bourgeois boudoir lined with a fresco representing a landscape. The fresco is partially hidden by a screen decorated with swans on a golden background. FransVerhas frequently used this screen in his paintings, which brings a sophisticated and sunny atmosphere to the room where his socialites are held. In the foreground, the silhouette of the character highlighted by an outfit in luminous tones is standing out against the richly colored background. She is comfortably installed in front of the table on which a bouquet of roses arranged in a porcelain vase with a floral decoration and yellow roses placed on the table match with the tapestry of the wall representing the omnipresent nature in the composition. A table covered with a patterned tablecloth and a soft wool carpet, on which a velvet cushion serves as a footstool for the elegant woman, completes the decor of this refined interior.

Inspired by the works of the Belgian painter Alfred Stevens, FransVerhas treats the rendering of the abundant and diverse textures of the composition with great mastery, playing with the effects of materials, but also with light and shadows. Similarly, his way to paint the fluidity and rendering of the satin fabric of the dress evokes the technicality of the master Stevens. Thus, the woman is highlighted in a rich environment of “beau monde”.

The woman's porcelain complexion and chestnut hair framing her face represent the canon of the beauty of her time. She is smiling contentedly as she is peering at a gold bracelet from a well-stocked jewellery box. The box seems to be full of jewels, such as a pearl necklace and a tiara, showing off the wealth of the hostess. Her left arm is adorned with a large cameo bracelet that was very popular in the 19th century, especially by crowned heads, and she is wearing a thin ring on her ring finger. The face, three-quarters, tilted to the left and her lowered eyes, gives her an air absorbed by her jewel. The painter pays particular attention to the gaze to depict an emotion.

This scene echoes another painting by Verhas titled “The New Bracelet” in which the same characteris shown in a similar pose, seated in front of a pedestal table. The entire work of Verhas bears witness to his taste for anecdotal and narrative art. He generally coats his wooden panels with worldly characters, competing in elegance, in a realistic vein, developing a decorative style prized to adorn the beautiful residences of the capital.He thus gained a good reputation as a portraitist and painter of genre scenes both in Belgium and France.