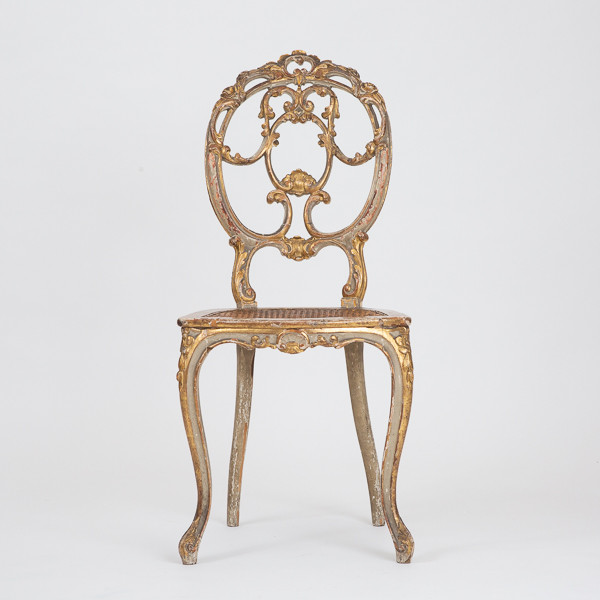 Suite of four chairs in painted and gilded wood with openwork backrest decorated with stylized foliage, resting on arched legs. Russia at the end of the 19th century.

Underneath the uprights of each chair, a label and an ink stamp are applied.

At the top of each label, there is a three-letter abbreviation « Е.И.В » for «Her Imperial Majesty». This abbreviation is followed by the title of nobility "князя" "Prince". A name (rather a first name and surname) is written at the bottom of each label as follows:

We also specify that these names are written in genitive, this grammatical case in Russian marks the belonging.

The oval stamp of His Imperial Highness George Maximilianovich of Leuchtenberg, Duke of Leuchtenberg and Prince Romanovsky, son of Maximilian Joseph Eugene Auguste Napoleon of Beauharnais and Grand Duchess Marie Nikolaevna of Russia, daughter of Emperor Nicholas I and the round stamp of Duke Alexander Georgevitch of Leuchtenberg, son of the first, inform us about the imperial provenance of these chairs.

In 1876, when his mother died, Prince George inherited the neoclassical Leuchtenberg Palace next to Peterhof, near St. Petersburg, where this suite of four chairs probably originated. In 1879, he married Princess Therese of Oldenburg in Stuttgart without the permission of the Czar or the Russian Orthodox Church, and thus became the only son of the Grand Duchess Mary Nikolaevna to conclude a dynastic union. He died in 1912 and was buried in the Grand Ducal Mausoleum of St Petersburg. Prince George appears in "The All-Nighter of St Petersburg", a historical novel by Prince Michael of Greece.