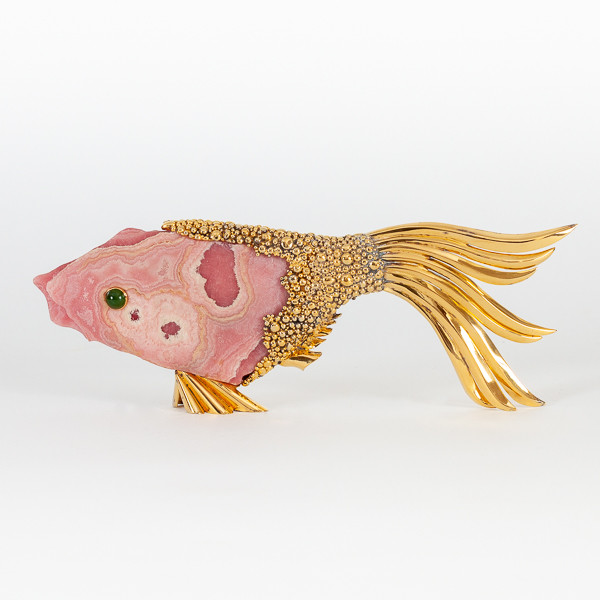 This work is signed on the back, «jewellery G. Braque by Heger De Löwenfeld», with the numbers 209 and LR264 and was made based on the drawing by Georges Braque, Glaucos editions. A certificate of authenticity from Maître Olivier Marquis, auctioneer, dated Mars 5, 2020 will be provided to the purchaser.

In ancient Greek mythology, Laomedeia is one of the 50 Nereids (nymphs of sea waters), daughters of Nereus and Doris who accompany Poseidon chariot.

In October 1961, Hegel de Löwenfeld, master lapidary, answer a request of Georges Braque who was informed about his works. The painter submits to him his «Greek head1» that he would like to see transmuted into a gemstone work. This is the beginning of a fruitful relationship, one that will lead to the creation of sculptures and jewellery consistent with the gouaches painted by the artist onto sheets of 27x 21 cm. Each has the mentions “ good for signature” and “IH.M. Hegel de Löwenfeld to reproduce the work above” and is dated and signed «G. Braque».

André Malraux, who was Minister of culture at that time, whom DeLöwenfeld showed his first works, declared: «This is Braque's apotheosis». He then suggested an exposition of the collection on completion in Louvre Palace at the Pavillon de Marsan in March-May 1963, and that was for the first time when the artist was still alive to pay tribute to the great French painter. French government acquired 11 of those precious sculptures from 1963.