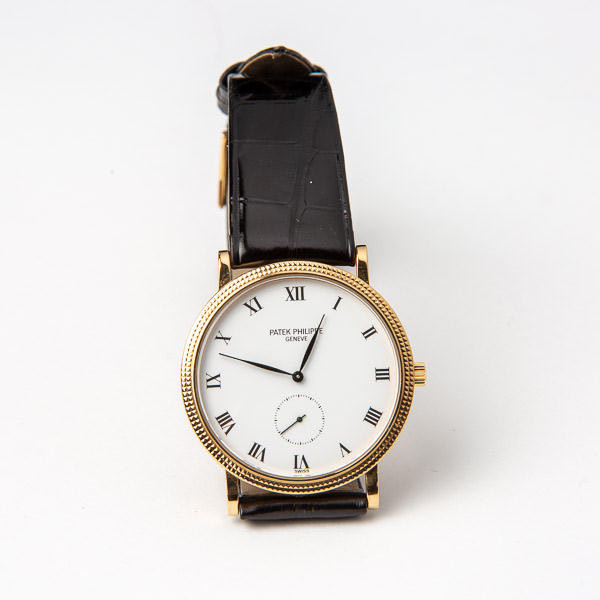 This mythical Patek Philippe, condensed of elegance, balance and functionality, in precious metal, is in an exceptional state of conservation with its certificate of origin of March 18,1989 which will be given to the purchaser.

Wristwatch made by Patek Philippe in gold, Calatrava model with its round case and refined dial and guilloché bezel nicknamed Clous de Paris. This timepiece is one of the most emblematic of the Patek Philippe style, inspired by the Bauhaus design. Its first version was launched in 1932. This mechanical watch is considered to be the emblematic model of the manufacture, this slightly enlarged 1980's version, having an extra-flat profile and a very low profile. This model embodied the watchmaker's style in terms of communication for almost ten years.

Patek Philippe's story begins in 1839. Considered by many experts as the most prestigious of the Swiss watch manufacturers, Patek Philippe represents the watch of illustrious figures of Pope Pius IX, to Queen Victoria, Victor Emmanuel III of Italy, Christian IX of Denmark or Albert Einstein. It was founded in Geneva by the Polish Antoine Norbert de Patek and the Czech watchmaker François Czapek. Following numerous disagreements, Czapek gave way to the French engineer Jean Adrien Philippe, who had invented a pocket watch that could easily be wound up by a crown. He will also adapt the pantograph for the manufacture of watches. After Patek Czapek & Co. until 1845, Patek & Co. was founded in Geneva by Antoine Norbert de Patek, Jean Adrien Philippe and Vincent Gostowski, then Patek Philippe & Co. in 1851. The Stern family, still the owner, took over the company in 1932.


Patek Philippe has owned all the customer archives since its origins, and has created many new products such as the women's wristwatch or the practical wind-up watch. More than 70 patents have been filed since 1845, including the precision regulator (1881), the perpetual calendar mechanism (1889), the double chronograph (1902), the Gyromax pendulum (1949), mechanical watches with time zones (1959), the mechanical movement with peripheral rotor (1964), the Easter date indicator mechanism (1985), the annual calendar (1996) and the astronomical representation mechanism (2000)... The most incredible home-made order will be that of an American banker who wants to own the most complicated watch in the world. It was born in 1933 after 8 years of work thanks to 24 watchmaking complications and it remained the world's most complex watch for nearly 50 years. Named Henry Graves Supercomplication, it is also the most expensive watch ever sold at auction. In line with this tradition, and to celebrate the 150th anniversary of the company, Patek Philippe manufactures the 89 caliber, the most complicated in the world. This 9-year project allows to have a caliber composed of 1728 pieces with 33 complications and Geneva hallmark. While the Calatrava remains the most famous model in the house, others, such as complications, have also marked the history of the brand, as well as the models Gondolo, Ellipse d' Or, Nautilus or Twenty-4 for women...